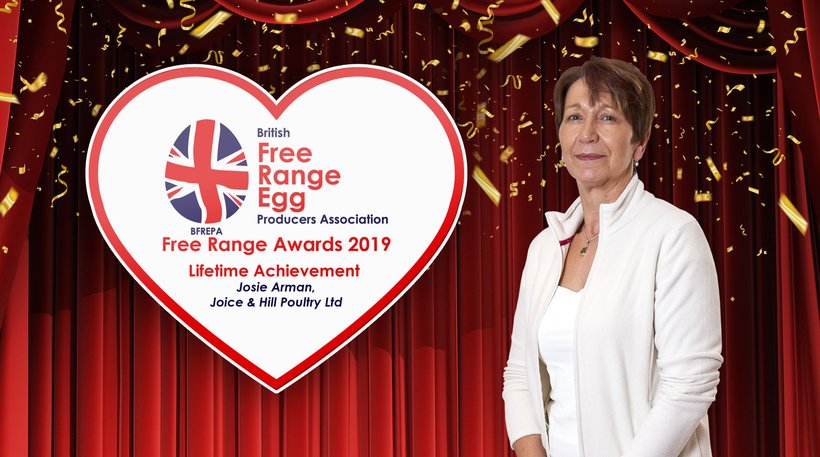 The annual conference for British Free Range Egg Producers Association (BFREPA) was held on Tuesday 15th October 2019. Prior to the conference the BFREPA Gala Dinner and Awards, in association with The Pullet Hatcheries Association was held on Monday evening at the Hilton Metropole Hotel, NEC, Birmingham and we were delighted that Josie Arman received the most prestigious “Lifetime Achievement Award”. 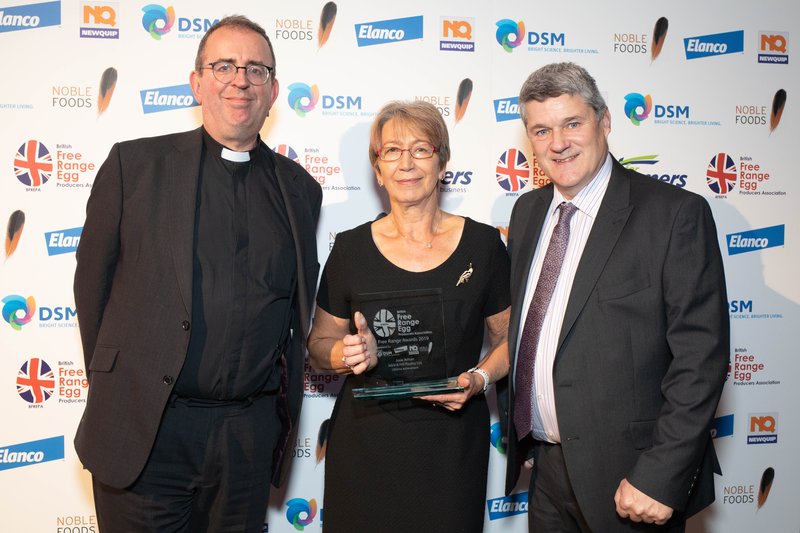 The award was presented by Reverend Richard Coles, former member of the 1980s band The Communards and James Baxter, Chairman of BFREPA.

Some background information on Josie’s formidable career to date:

Josie’s career in the egg industry started in 1970 as a sales office assistant under Jim Wilson, MD of the UK layer distribution company Warren-Studler Breeding Farms Ltd, who produced and sold the Warren SSL through seven franchise hatcheries in the UK & Ireland, supplied with Parent Stock from the hatchery at Orton Longueville, Peterborough. The hatchery capacity was around 50,000 chicks a week and the chicks were delivered mainly by the sales representatives in minivans. The Parent Stock were collected by the Franchise Hatcheries. During this period Josie met both Madame Studler & Jim Warren, the founders of Warren-Studler.

Moving with the company

In the early 1970s, Warren Studler became part of Institut Merieux and the name changed to ISA Poultry Services and the breed name changed to ISABrown. In 1978 Josie became sales office manager. Around that time the Babcock breed was added to the fold, followed in the mid-1980s, by the Shaver breed.

Josie moved with the company to a new hatchery and current location at Eye, Peterborough in 1988, the company became part of Merial and the name changed to Hubbard ISA. Following more changes eventually in 2003, Tom Barron ISA was formed as a joint venture between Tom Barron and ISA Poultry Services.

Following the purchase of the ISA Breeding company by Hendrix Poultry Breeders in 2005, Joice and Hill took over the ISA Poultry Services business and moved to the Eye hatchery in 2006 with the Bovans breed. Josie stayed loyal to the ISA breeds continuing with Tom Barron (Hatcheries) Ltd and working from a rented office at the Eye hatchery.

Following the decision of Hendrix and Tom Barron to go their separate ways in 2012, Joice and Hill took on the full portfolio of breeds and Josie joined as head of internal sales and planning. Josie then became part of the management team with Stephen Turner, Peter Cumbers and Nick Bailey. Josie has worked with the same breeds all of her career and is now on her fourth Managing Director! Over the years she has seen many changes in the industry, for example in 1970 a producer with 12,000 birds was a major customer and most of the producers were 1,500 to 2,000 birds flocks. Over the years the industry has fallen into fewer but larger hands, and most start-up flocks now are 16,000 birds.

The BFREPA Council nominated Josie because she is one of those people who quietly gets on with her job, with efficiency, tremendous knowledge, and skill. Josie Arman has dedicated her career to the egg industry and is a very deserving winner of the Lifetime Achievement Award.

A remarkable achievement and Joice & Hill are very proud and pleased Josie has been recognised in this way.