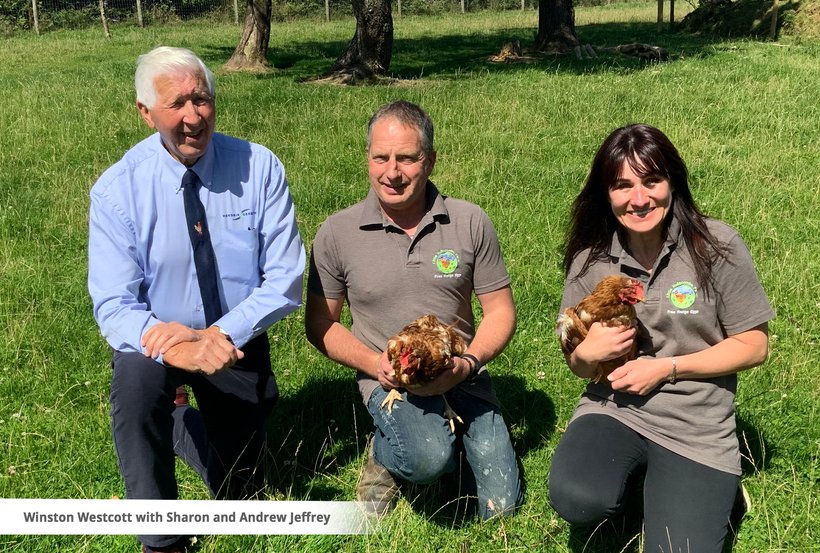 From pullet rearing to packing, through to marketing and distributing their own eggs - meet Andrew and Sharon Jeffery of Little Hollacombe Farm.

Andrew and Sharon Jeffery of Little Hollacombe Farm in Devon, have achieved an unusually high degree of self-sufficiency, since moving into poultry in 2010.

Now, having gone from 4000 birds to 29000, followed by the decisions to move into rearing and then packing at the farm, Andrew is taking stock and catching his breath before considering his next project.

Little Hollacombe Farm is in an area of natural beauty and coastline, just outside Bude on the north Cornwall and North Devon border, near to Clovelly. In this idyllic location, and after leaving his job as a herdsman, Andrew and his wife Sharon began injecting new life into what was an existing laying farm in need of some TLC. Now, after 10 years of hard work, including building their own packing line in just 2 months, they have a thriving integrated egg business.

Concentrating purely on free range production, the Jefferys depend on Bovans Brown and Warren birds, both hatched by Hendrix Genetics’ UK distributor, Joice and Hill. The farm consists of four mobile units, each of 3,000 birds, one static flat deck unit of 5,000 birds, housing Warren layers and one Jansen multi tier house, of 12,000 Bovans Brown birds.

The decision to begin rearing

When it comes to rearing, Hollacombe Farm entrust Humphrey Pullets to give the Bovans chicks a great start, but they rear the Warren birds themselves. The decision to begin rearing was taken after discussing the pros and cons with Joice and Hill’s South West Area Technical Sales Manager, Winston Westcott.

Taking complete control over rearing means the birds can be kept above target weight and at transfer they alleviate stress by leaving the lights an hour behind the recommended programme. They then drop lights to 10 hours per day slowly, keeping a week behind the schedule. As Andrew puts it “We don’t rush them into egg, in fact I am happy if it’s 21 weeks before I see an egg, after that, size isn’t an issue.”

“The decision to rear on the farm creates a significant saving and no big bill when it comes to re-stocking, and means the pullets can be above target weight at 16 weeks”

Andrew is delighted by how readily the Warrens can be managed for larger eggs and the fact that egg numbers are well above the current standard. Summarising the appeal of the Warren, Andrew says “I can’t fault the Warren when it comes to managing for larger eggs. It’s a robust and heavier bird which is doing very well, producing larger eggs, which are worth more. They have good liveability and seem to shrug off challenges readily. In terms of temperament, they are not flighty, but not too tame either, they find the nest box and jump if they need to. Their eggs have a strong shell at end of lay and we get a good colour of yolk by adjusting the feed”

The Warren is the result of extensive consultation and focused research into the best solution for the free-range sector in the UK. Bred from proven Hendrix lines, it is resilient and well behaved, slightly larger framed with all the advantages of modern hybrid egg quality, productivity and performance.

Marketing their own eggs

Little Hollacombe Farm is effectively a husband and wife team, with one full time and one part time team member helping to manage the birds and on the packing line. Support is on hand from three daughters and their partners if needed, with veterinary support from Stewart Young, feed from ABN, and technical management advice from Winston Westcott. While Andrew looks after the birds, Sharon takes care of marketing and selling the eggs. After putting in their own packing line 12 months ago, 40% of the eggs are now sold to wholesalers under their own Little Hollacombe Farm Free Range brand, with the balance going to other local packers.

Andrew is already taking some flocks to 80 weeks and is progressing to longer cycles for both Bovans Brown and the Warren. “I used to be happy to see birds go at 72 weeks, but now seconds are low for longer and now I am packing myself, and controlling the seconds, we will definitely be able to deplete later”, he says.

Patience, hard work and vigilance are now paying off for Sharon and Andrew. Looking back, he admits he thought farming layers would be an easier life than that of a herdsman, tied to two milkings every day. “In fact,” he says, “the hours are actually roughly the same. This is not a 9 -5 job and things don’t mend themselves. I have learnt to act quickly on any sign of trouble”.

Little Hollacombe Farm are proud to say that every hen is extremely well cared for by the family-run team. They are 'Laid in Britain' approved, which means locally produced, low food miles, guaranteed fresh eggs. Not a single egg sold under the scheme has ever proved positive for salmonella and every single egg produced on the farm is stamped with a unique ID number making the eggs fully traceable.