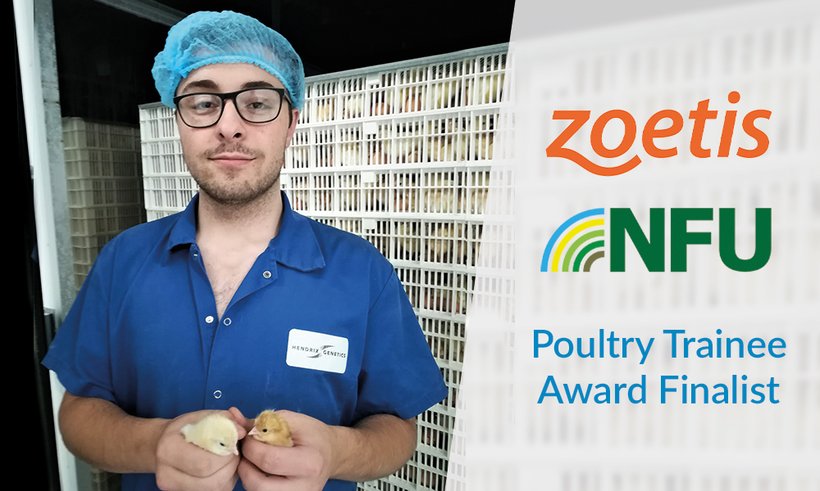 The finalists for the Zoetis-NFU Poultry Trainee Award span the industry - from a hatchery to broiler growing and free-range egg production. And since the original award in 2007 this is the first time the layer sector has provided two entries.

Jack McAlister, whose interest in poultry began when a schoolboy keeping a few hens, works at the Joice & Hill hatchery at Peterborough. The three finalists will meet the judging panel at the NFU’s new London offices in Westminster on Wednesday January 22 where the winner of the £2000 training grant from Zoetis will be announced at the NFU National Poultry Board meeting. All finalists will be given a tour of the Houses of Parliament close by and then go on the award dinner at the Paternoster ChopHouse in the City of London.

After completing A levels in business studies and applied sciences, Jack McAlister became bored working for a financial services call-centre and returned home one night to tell his mother that he’d like to follow up his early interest in hens by becoming a chicken farmer.

He was searching the Government website promoting apprenticeships when he saw an opportunity at the Joice & Hill hatchery a few miles from his home at Market Deeping. He contacted them and went to find out more about the work.

That was in September last year. Since then he has worked in every area of the hatchery during his level 2 poultry worker apprenticeship, has done deliveries to customers and spent time on breeder farms.

He was given additional responsibilities after only five months and is now training to supervise the chick take-off, dispatch and culling areas and to have a role in health and safety, along with becoming a designated first aider and forklift operator

Following the publication of our new breed standards in September, a complete set of updated management guides have now been published.

Four finalists have been announced for the 2021 Zoetis-NFU Poultry Trainee Awards and our very own Jack McAlister is among them.

Today would have been the opening day of the Pig and Poultry Show 2020. We will miss the opportunity to meet our customers and contacts face to face.