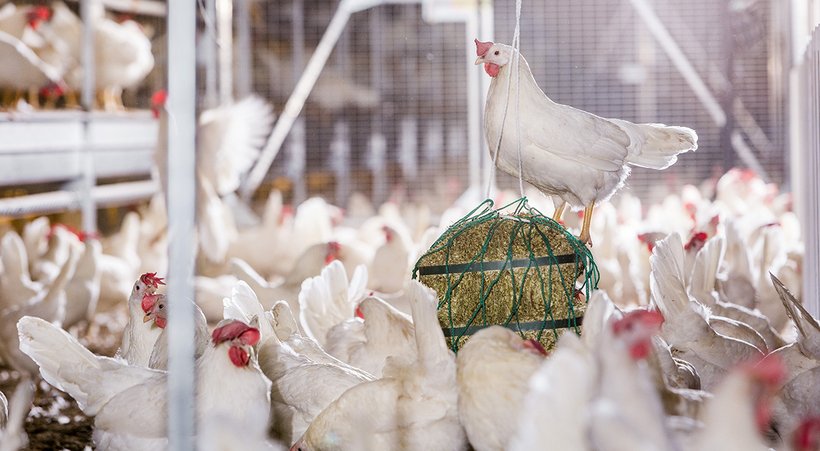 Globally, much of the recent work on nutrition has been based on the needs of birds housed in intensive systems. However, there are significant differences, particularly in energy requirements, for birds housed in floor systems. In this article, we explore important aspects of nutrition for non-intensive flocks.

The most important change in understanding what the birds need in alternative systems is the level of energy spent by the hens. The energy needed for production is not different because production levels are equal. However, within a free-range system, the birds are able to move freely and express natural behaviours, so they use significantly more energy in their daily activity. In addition, temperature is often significantly lower than in the controlled environment of a colony house. This also increases energy requirements in free range and organic flocks.

For this reason it is important to start out with uniform flocks of very robust birds with well-developed appetites and digestive systems. These flocks will then continue to produce a high number of eggs, maintain good health and be able to resist disease. In order to ensure that the birds continue to lay well at the peak of production, body weight (as we know) is an important factor. Poor body weight leads to weak birds that are more susceptible to disease with a lowered production rate. At the start of lay, it is advisable to reach mature body weight quickly and use feed with a higher energy value (2850-2900 Kcal/kg). Following this, at the middle and end of lay, the goal is to maintain a stable body weight. If the bird is carrying too much fat, she is at risk for a fatty liver, and being too light will result in decreased production. Below is an illustration of the relationship between energy consumption and energy requirements.

The daily requirement for amino acids needed in the layer diet in a free-range system does not differ at all from a cage system diet. Because the amino acid requirement is dependent on the egg mass produced and the concentration of amino acids in the diet should be adapted to the observed feed intake. Therefore, if the feed intake is higher in the alternative system, the inclusion level of the amino acid feed in percentage could be lower.

At the start of lay, there is a higher requirement for growth. Because feed intake can vary and flock uniformity can be a challenge, it is recommended to adjust the amino acids in this period of life. A minimum safety margin of 6% is recommended and advised margin is 10%.

Amino acid levels should be adjusted according to:

• Feed consumption (for example at low feed intake level the concentration of amino acids should be increased).

In the middle and end of lay there is a lower requirement due to the end of the growth. If consumption is stable and production high, it is not useful to decrease the amino acid concentration to secure laying persistency since a lowered feed concentration pushes down the laying rate.

Additionally, the feeding technique used when managing hens is a key factor in achieving the best possible shell quality and sufficient nutrition levels. It has been found that the main part of the diet is ingested in the last 4 hours of the day. This is natural feeding behaviour, and so to encourage this trend, especially in an alternative system, we advise the provision of least 60% of the daily feed in the afternoon and before this period the feeders should be set to avoid distribution in the middle of the day for a period of time (approx. 3 hours) depending on the speed, type and feed level in the system. This is called the Empty Feeder Technique or Gap Feeding. It is advisable to discuss these details with your local Joice & Hill representative.  Applying the empty feeder technique controls body weight, flock uniformity and egg shell quality because the total diet is consumed daily, including the fine particles in the feed that are most of the time the vitamins, minerals and amino acids.

In order to achieve the best liveability and feathering, introducing coarse insoluble fibres will affect layer behaviour, body weight control, feed intake capacity development, and feather cover. Coarse insoluble fibre improves digestion by stimulating gut movements and stimulates the development of crop and gizzard in rearing phase. Lignin, for example, is an insoluble fibre. Without this type of fibre, pecking and eating of feathers can occur in order to obtain fibre and to achieve a feeling of fullness. The percentage of fibre included in the diet depends on the environment.

In highly concentrated diets the crude fibre level should not be too high, maximum of 3.5%, because fibre is diluting the diet. Lower fibre diets are recommended in high temperature environments where feed intake is a challenge. It is important not to dilute the feed too much so that the birds will consume enough energy and nutrients like amino acids daily. It is recommended to focus on additional fibre in the developer phase to stimulate feed intake capacity development.

Including more fibre up to a level of 7% is best for birds in a free range environment where feather pecking is more common. Increased structural fibres in the feed will encourage fullness in the birds leading to more docile behaviour, and it will provide structure in gastrointestinal tract.

At different points during development, layers will need varying fibre levels. At the start of lay feed intake capacity is still low, and so it is important to get a good start for production and growth. A high density of nutrients and energy is needed with high amino acid. Therefore, fibre content in the feed should be lower in the start of lay period in order to get the most amount of nutrients in the feed.

At the end of lay, feed intake is sufficient and so a lower energy concentration and nutrient level is sufficient in their diet. If there is good lay persistency, there is no decrease in amino acid requirement. Birds have a drive to eat, and so without adjustments there is the risk of the birds carrying too much fat, leaving them vulnerable to issues with a fatty liver and consequentially poor egg shell quality. The addition of coarse insoluble fibre will help to control body weight, their behaviour is quieter, and reduce mortality.

In a cage free environment, feather cover is an important factor that affects welfare standards and economics because a poor feather cover increases the feed intake level because maintenance requirements are higher.

Feather cover will not have an effect on production parameters such as egg production, in terms of egg numbers, egg quality (internal and external), or laying persistency. However, as welfare standards continue to evolve, feather cover will be an increasingly important welfare indicator. Another negative impact of reduced feather cover is that the bird’s feed intake level will increase with poor feather cover, depending on environmental factors, leading to an unfavourable feed conversion ratio.

In summary, there are a few key nutritional areas to focus on when raising birds in an alternative environment:

• Amino acid requirements are not significantly different, but the levels should be adjusted depending on the egg mass produced and observed feed intake. Feed intake tends to be higher in alternative systems.

• In order to ensure good liveability, the use of coarse insoluble fibre will improve feather cover and will lead to more docile behaviour.

Adapted from an article by Paulien Rutten Nutritionist/Product Manager at Hendrix Genetics.