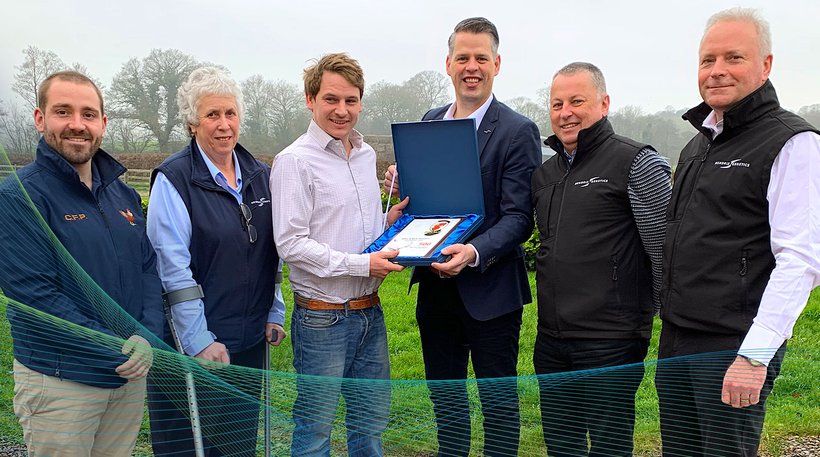 500 Eggs in 100 Weeks – Marking a landmark at Wellington Farm, Herefordshire

On 22 January Jeroen Visscher, Director of Layer Research & Development at Hendrix Genetics joined representatives from Country Fresh Pullets and Joice and Hill, at Wellington Farm, to mark a landmark in UK poultry.

Wellington Farm in Bishops Frome is run by Nick and Allan Panniers and they received a plaque for managing the first commercial UK flock of free- range Dekalb White birds, to produce 500 eggs per bird, over a 100-week cycle.

Congratulating Nick Panniers, Jeroen Visscher said “It is fantastic to see the results of our breeding programme translating into commercial success”. Nick Panniers replied that it was a team effort and that it was really his father Allan who should be receiving the award.

He went on to say “White birds perform extremely well in free-range and it is important to note that the longer cycles, feed efficiency and behavioural traits combine to make white birds the low carbon footprint and high welfare option”. 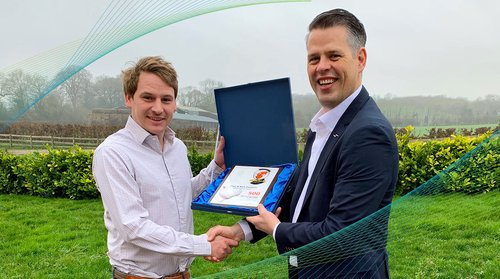 The Panniers Family were running a mixed arable farm at Bishops Frome when Nick returned from Harper Adams Agricultural College, having gained a BSc in Agriculture. With the necessary land available and looking for a secondary income stream they opted to invest in poultry farming.

The first flock of 16,000 brown layers was housed in a brand-new, Big Dutchman, multitier house in 2010 - a system Nick believes is well built and best reflects the bird’s natural behaviour and the regular muck supply comes in handy for the arable farm.

Working in partnership with Lloyds, the eggs from the initial flocks were managed to conform to Stonegate’s standards for high Omega 3 “intelligent eggs”. Looking back Nick notes that “feed costs were higher, but the egg price was also higher”. New houses were built in 2015 and 2018 bringing the total capacity to 64,000 birds across 4 houses of 16,000.

In 2018 Nick and Allan were offered the new contract option by Stonegate. Attracted by the challenge, they were also wary of a step into the unknown - changing from a high value to a lower value proposition, and from brown birds to white.

On the suggestion of Tom Lander of Lloyds/CFP, the team from Wellington Farm met with Penny Humphrey of Joice and Hill to discuss introducing Dekalb Whites to fulfil the new contract. Nick and Allan then visited Holland, with Joice and Hill, to look at the way Dekalb Whites were being managed on Dutch Farms. Suitably reassured, he went on to order the birds from the Peterborough hatchery. They now rely exclusively on Dekalb White and as their recent achievement proves, they are clearly delighted with the decision.

“The experience of working with white birds is very different to a brown bird” Nick says, “They are individuals, intelligent and they pick things up quickly, they like to be by themselves. Because they are initially flighty it can make weighing and stock management a challenge, but we have learnt to overcome this by weighing before” lights on. The extra effort is worth it, the birds respond well to good training and floor eggs are low”. 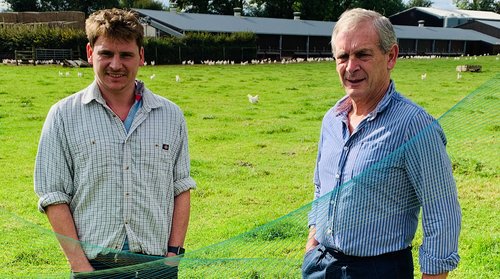 The management philosophy at Wellington Farm is “Keep it simple”. Wherever possible, the birds are not disturbed in the afternoon and a consistent early morning routine is quickly established and meticulously maintained with the birds walked every morning, at the same time, to check for feed, water and any changes to behaviour.

Supporting Nick and Allan are stockpersons Gary Morgan and Jackie Dorrington, with Ed Parker providing farm support. Nick says “I am convinced the best input is rewarded with the best output. We have the best breed, the best farm, the best team, the best rearer and the best support”.

The Panniers mill their own feed and believe that diet changes with added fibre, Lucerne bails, and oats in ration have improved feather cover. Meanwhile they are working on controlling egg size and quality at end of lay even further by experimenting with dimmer lighting regimes.